Asahi Breweries, Ltd. (Asahi Breweries), is a subsidiary of Asahi Group Holdings, Ltd. Based in Tokyo, Japan, the company develops and produces alcoholic and non-alcoholic beverages. Eager to enhance its presence in the growing RTD*1 market, Asahi Breweries wanted to develop a new pack design to increase their share of Asahi Mogitate (meaning “freshly picked”)”, one of their popular canned RTD alcoholic beverages. Launched in 2016, it quickly became a blockbuster. Asahi Mogitate is a ‘cash cow’ in the RTD business - more than 600 million bottles*2 have been sold to date.

The RTD market is expanding every year as more and more Japanese enjoy alcoholic beverages at home. This is partly because many company employees are encouraged to go home earlier as a result of working practice reform, and also because household budgets are stretched, especially following the consumption tax increase in October 2019. Thus, the market is highly competitive, with numerous flagship products available from many companies.

Asahi Mogitate was later to market than competitive products, so it was critical for Asahi Breweries to differentiate it from other offerings. Asahi Breweries’ research indicated that consumers spend just a few seconds in-store looking at beverages before deciding what to buy. This meant they needed to develop a new pack design that would promote their brand concept of “freshness” and attract consumers’ attention within just a few seconds.

Asahi Breweries knew it was essential to create a new point of view with a new appealing pack that would catch consumers’ eye on the shop shelf. To do this they needed a research approach beyond conventional consumer on-site surveys such as Central Location Test (CLT). They chose neuro research to conduct scientific analysis backed by neuro science and quantitative data on their pack designs.

Macromill worked with Asahi Breweries to apply a new methodology utilizing EEG (electroencephalogram) and eye tracking. This approach can identify which parts of a pack respondents gaze at, and measure the appeal of those different elements.

Conventional eye tracking techniques only show which areas of a pack are being looked at using a heat map. But Macromill’s approach utilizes EEG far beyond a heat map to measure respondents’ emotion. With this sophisticate technique we can measure the type of response, whether positive or negative, to the different areas of the design.

In this project, multiple participants viewed real cans with the new design, and images of cans on screen. In parallel, we measured their gaze direction and brainwaves (Figure 1). The results were combined to create indices based on averages to provide meaningful quantitative data. 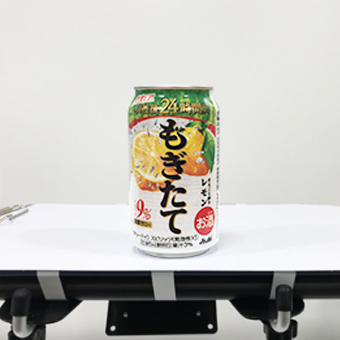 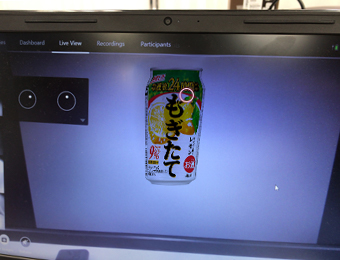 In the EEG measurement, we first obtained participants’ “occipital alpha suppression” (which identifies their neuro-physiological responses of arousal, caution, and interest) and “frontal brain alpha asymmetry” (which identifies their pleasantness, respectively). Next, we evaluated the pack’s appeal (degree of interest, positive/negative feelings). In the eye tracking, we measured which parts of the pack people were looking at, and which areas were more important for them. We combined those conscious and unconscious responses to generate scores from the synthetic variables and place different colors on a heat map (Figure 2). Finally, we ran a questionnaire-based survey to obtain subjective data. 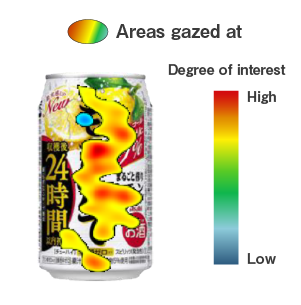 * The warmer the colors, the higher the level of interest or preference shown by respondents.

The sales message of Asahi Mogitate is "a fresh Chu-hai (shochu-based beverage) is delicious!". What kind of pack design is right to convey this message? Asahi Breweries selected the two design proposals from more than 100 concepts. Their past surveys proved that consumers associate the term "Mogitate (freshly picked)" with fresh fruits. For this reason, Option 1 had a large character-type logo of "Mogitate" and a smaller symbol of their appealing point, "Extracted within 24 hours of harvesting." Option 2 made the wordings of "Extracted within 24 hours of harvesting” larger than the Mogitate logo, and also included a picture of green tree to convey an image of picked fruit.

As a result, Option 2 received higher total scores on average in terms of EEG (when testing with real cans and images on screen). The analysis revealed this was because respondents were intrigued with the number “24” (Figure 4). 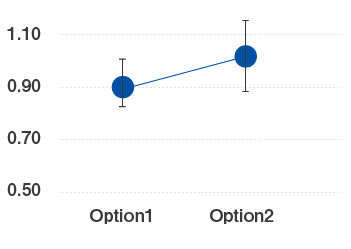 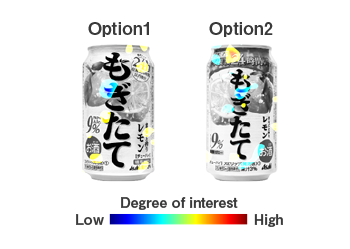 *The number “24” in Option 2 was very appealing to participants.

Figure 4: Comparison between Options 1 and 2

As a result of our comprehensive study Asahi Breweries selected Option 2 (Figure 5).

Our comparative analysis with EEG and eye tracking proved our hypothesis that people look closely at our unique appealing point “Extracted within 24 hours of harvesting” at the top of the can in Option 2. We demonstrated respondents favorably recognized the design (layout) representing our appealing point and that the message was properly conveyed.

Asahi Breweries believed that a message at the top of a pack would be the most visible to consumers because they usually gaze at the top part first then look downwards. But no one had proved this empirically until this research project. We did identify a falsehood in our hypothesis. We thought people would be interested in the wordings of “Extracted within 24 hours of harvesting” as a whole. But they actually focused on the number “24”.

*2  The number of cans when converted into 250ml size cans :
Actual from Asahi Breweries from April 2016 to February 2019 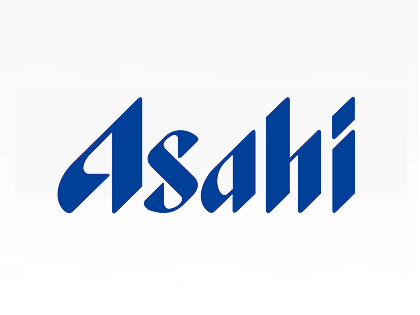